Shooting outside the comfort zone

Earlier this month I was thrilled to be asked along to a shoot organised by +Paul Pavlinovich and +George Darsas from the +Melbourne Photowalk group.
The brief was to take a group of approximately 12 photographers and shoot images of a theatrical production, titled "The Death of Peter Pan"
This represented a fantastic opportunity to get outside of my usual comfort zone and shoot something both different and challenging.


We had a special session which took place before the last night of the play, we ran through some scenes, sometimes silently, sometimes with dialogue, and often with the full weight of music adding emotion. 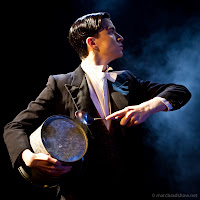 The set was simple, a chair, a table, and an old gramophone.

Thanks Paul and George for organising, thanks to the photographers for inspiration and generally keeping out of each others way, thanks to the cast and crew for your time in making this happen, and huge thanks to Rob Chuter, the director for being so accommodating and allowing us in to photograph the play.

Posted by Marc at 8:10 pm
Email ThisBlogThis!Share to TwitterShare to FacebookShare to Pinterest
Labels: photography, photowalk